Our purpose is to spread the light of Truth by connecting people to Jesus Christ.

The Swords are preparing for a mid-2021 return to Tampere, Finland, when the family will begin pioneering a work in that city. Their goal is to integrate and remain in the country indefinitely.

If you wish to communicate with Philip and Amy about their ministry in Tampere, we invite you to contact them.

Philip and Amy were both born in Columbus, Ohio. They married in 2005 and have three daughters, Lorelai, Anastasia, and Zoe. Philip has felt a pulling towards missions since age 10 and prior to marriage, took part in two missions trips to Norway. Those made a tremendous impression on his life and after marriage, the Swords knew they would eventually pursue overseas ministry.

In April 2017, Philip and Amy visited Finland for two weeks with the purpose of seeking God’s direction for their lives. During that time, God placed a calling and burden for the country and people of Finland upon them; additionally, He miraculously healed Amy’s foot from a crushing work injury resulting from a 2-ton pallet falling on it. Following their trip, application was made for AIM through UPCI’s Global Missions and in December, the Swords were approved for on-field ministry.

During the summer of 2019, their family served on-field in Helsinki and assisted with various tasks involved with Finland’s first hosting of Nordic Conference. The entire family helped in Helsinki’s weekly worship services and also ministered to the congregation in Turku. Strong relationships were forged with members of Team Finland as their daughters experienced the culture and need for laborers in this nation. Love for the area and people encapsulated their entire family and through it, a God-given burden for the city of Tampere was accepted. 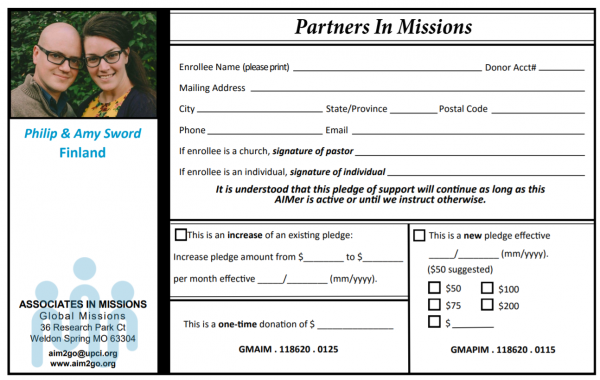 Associates in Missions are responsible for raising their own giving partners and budget offerings. If you can assist the Swords with funds for Finland, please contact them. You can also click on the Partner Form, print, and mail it to the UPCI at the given address. Thank you in advance for your consideration of support. God has a plan for Finland and we believe that the Swords will fulfill an important part of His vision for the country!

We are excited about the part that the Swords will fulfill on our team. We were present as God unfolded His calling upon their lives. We have witnessed the healing miracles they’ve received and also seen miracles occur as they prayed for others. We believe in them and their God! Beyond Tampere, the Sword’s vision for Finland is vast and we expect their team involvement to be one of great impact. We are thankful for the incredible people that God is bringing to us! Truly, His ways are great and we give Him praise! – Mark and Glenda Alphin, Global Representative